NEXPV participates with booth at the SOLAR PAKISTAN EXHIBITION 2016

TOKYO, 16 March 2016 – NEXPV today announced that the company will have a booth at the SOLAR PAKISTAN EXHIBITION 2016. Pakistan is on the list of countries NEXPV wants to become active in as solar power plant developer and IPP. At the moment the company researches the opportunities in the Pakistan solar plant market and it is in the process of selecting a local partner to start the business. The Lahore based company Wibsoft Technologies is co-exhibitor in the booth of NEXPV. They have offered to give support during the first phase of market entry.

The preparation for the SOLAR PAKISTAN EXHIBITION 2016 included a meeting between Eduard Talman, Managing Director of NEXPV, and Mr. Farukh Amil, serving as the Ambassador of Pakistan to Japan. Mr. Farukh Amil told Mr Talman that he is very interested in the development of solar power plants in his country and he is looking forward to hear more about his experiences and the opportunities for NEXPV in Pakistan after the exhibition.

The government of Pakistan wants to increase the renewable energy power generation in the country and the first solar power plants are operational. The demand for power is growing fast in Pakistan and the generation capacity can not keep up with the growing demand. The coming years there will be a shortage of power. The very fast installation time of solar power plants makes it ideal to quickly add more generating capacity to the grid in Pakistan.

NEXPV is a Japanese Independent Power Producer (IPP) that develops, constructs, owns, sells and operates utility-scale solar power generation plants. NEXPV stands for NEXPV Solar Power Generator and refers to the next generation of Solar Power Plants with the size beyond the Mega Solar scale. The target of NEXPV is to develop and construct the first gigawatt (GW) scale Solar Power Generators within 5 years. The levelized cost of electricity (LCOE) of these gigawatt scale generators is targeted to be less than coal powered electricity generation. 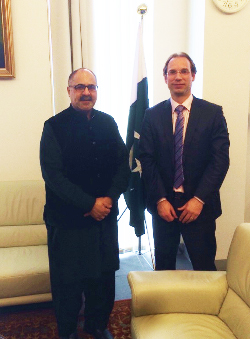 Mr. Farukh Amil, serving as the Ambassador of Pakistan to Japan (left), welcomes Managing Director of gigaSPG Eduard Talman (right) at the embassy of Pakistan in Tokyo.