TOKYO, 18 February 2016 – Today NEXPV`s JV gigaSPG announced the acquisition of a solar project pipeline of 15 MWp form BIO POWER S.L., a Spanish renewable energy company that has developed Biogas, Cogeneration and solar utility-scale renewable energy projects. With this acquisition of 14 Japanese projects totaling approximately 15 MWp of solar projects in different development stages, gigaSPG made a promising start since the incorporation of the company 3 weeks earlier. The first few projects of this acquired pipeline are expected to be connected to the grid already in the second half of 2016.

gigaSPG is a Japanese Independent Power Producer (IPP) that develops, constructs, owns, sells and operates utility-scale solar power generation plants. gigaSPG stands for giga Solar Power Generator and refers to the next generation of Solar Power Plants with the size beyond the Mega Solar scale. The target of gigaSPG is to develop and construct the first gigawatt (GW) scale Solar Power Generators within 5 years. The levelized cost of electricity (LCOE) of these gigawatt scale generators is targeted to be less than coal powered electricity generation.

BIO POWER S.L. is a Spanish renewable energy company that has been developing Biogas, Cogeneration and solar utility-scale renewable energy projects in Spain since 2005. Currently BioPower as part of Avant Solar group operates solar and Cogeneration projects with a turnover of 108 millions and has invested more than 200 million during the last 5 years.

BioPower is a group of privately held companies with offices and operations in Mexico, Japan and Spain. In addition to its operating projects, BioPower also has a pipeline of approximately 90 MW of PV power projects in different stages of development in Mexico. 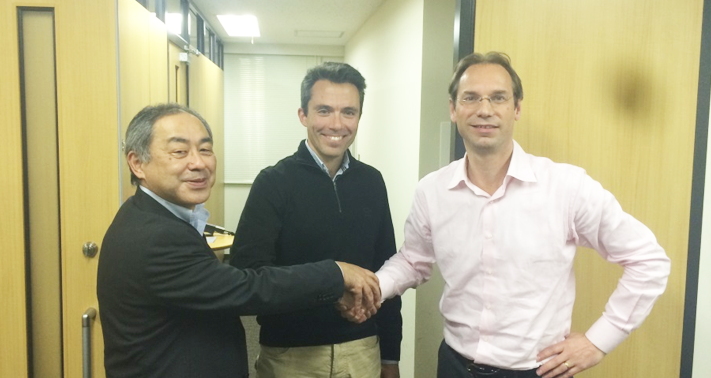 BIO POWER S.L. CEO Rafael Gonzalez Encinas (middle) shaking hands after closing the deal with gigaSPGs Managing Director Eduard Talman (right) and Eco Life Engineering Director Fujii (left), who replaced Hiroto Kuranami, the Representative Director of gigaSPG, who could not be present at the signing of the contract.